Judith Moffett began the trilogy now called Holy Ground back in 1991 with The Ragged World (reviewed in #360), a science-fantasy mosaic novel set in a future world where various human lives encounter the extraordinary when powerful aliens and their gnome-like intermediaries the Hefn intervene to save us from ourselves, in a near-future Earth threatened with ecological collapse.

Sequel Time, Like an Ever-Rolling Stream (reviewed in #379) had the traditionally difficult middle-book task of chronicling failure without driving the reader away. In some respects, Moffett's approach resembled... a 'still life' focus on domestic experience while grand events swirl in the background, until they finally draw relative innocents into the action. But the focus on country-girl teenager Pam gave the book an American pastoral quality so close to mainstream, its sense of the sacred land could not quite compensate for a general lack of SFnal tension—even in a future where humans can bear no children and deeply resent their helplessness in the face of alien power.

Middle-Book Syndrome nearly capsized the entire ambitious project, for Moffett lost her big-name publisher and it has taken 16 years, and resort to a very small press, to bring the trilogy to conclusion with The Bird Shaman. For fans and interested readers of the previous books, is it worth the wait? Indeed it is!

Though mainstream elements remain, particularly in a plot thread looking back at several generations of Pam's dysfunctional family, the second book's relatively narrow focus has opened up to much bigger questions of religion, ecology, morality, and the effect of unfathomably vast alien technologies upon individual humans.

The overall failure of the 'Gaian Directive' over the past decades has baffled the locals who became the aliens' eager Apprentices, but now some of them have finally come to see the flaws in the "carrot-or-stick thing"—not only the Baby Ban but the threat of mindwipe or death for the worst offenders makes many humans equate the Hefn with devils, or Nazis (with the Apprentices, whatever their race, standing in for 'blue-eyed Aryans' smugly safe from harm).

In a private journal entry, Pam takes an even gloomier view of human nature:

We remain a captive people, not a convinced one. We still think Earth is all about what people want. Released from the Directive, fertility restored, fear of mindwipe canceled, we'd go straight back to our old wasteful, arrogant ways... . [Y]ou can't save people from their truest selves. Which is exactly what we've been trying to do: save them, convert them. Lead them to renounce their sinful ways and be redeemed, born again as Gaia's stewards.

Put in those terms, evangelical Gaians do sound a bit like Nazi advocates of racial purity, or Americans trying to shove democracy down the throat of the Middle East, as well as militant ecologists.

Broad tactics of any kind may be useless, but events and individuals have a way of sneaking their way into the most intractable dilemmas, finding cracks in the monolith and setting off change. In The Bird Shaman, a kidnapping and a dream (or 'dream'?) start things moving and lead to sensational results. Unlike most works of SF or science-fantasy on this scale, it continues to portray these people in very human terms, with major characters who don't become avatars, demigods, or even heroes with a capital H.

A book this long and complex, with mainstream flashbacks and reflective interludes on everything from anthropology and religion to the Wordsworthian Sublime, does require some patience. But yield to its spell, and you won't be subjected to some endless ecological lecture or tedious immersion in mundane lives. Moffett provokes you to think and feel: sharing Pam's fury at a little act of alien magic, her awe at an ancient Southwestern cliff painting, her fears for a (pre-Ban) daughter, as well as sitting in on a discussion of possible futures she has with a friend while he's busy making tomato sauce.

All this leads to two distinct visions of the fate of the world—though they may not be as separate as all that, from the Hefn's perspective. Like ours, their science and technology can provide no real explanations to justify the core element of their philosophy, yet it continues to resonate past this book's end: 'Time is one.'

More than a quarter-century ago, aliens arrived at Earth and sought to save humanity from itself by imposing a "baby ban," blocking most humans' ability to reproduce.

Now, with only a few fertile couples left in the world and children a scarcity, the bulk of the world's human populace is beginning to despair that they will ever be allowed to produce offspring of their own. But the aliens are implacable, and their requirements for lifting the ban are non-negotiable: either human beings learn to live in harmony with their planet's eco-systems, or they will be eradicated through time and attrition, with the end result being the restoration of the Earth's natural biological balance. [...]

This book is the long-awaited third installment in a trilogy that also includes the novels The Ragged World and Time, Like An Ever-Rolling Stream. It's not necessary to be familiar with the previous books to enjoy The Bird Shaman; author Judith Moffett works all the background relevant to the story at hand into the course of the narrative, creating a seamless and complete novel that stands alone quite nicely.

Part of the reason this book succeeds so well as its own work comes from how well Moffett allows the tenets of her story to guide the character and the parameters of the world she builds, a place characterized by horse-drawn carriages as well as by exotic technological advances. In the process, Moffett explores the equally alien worlds of the extraterrestrials who rule earth with a heavy guiding hand, and the vanished tribes of indigenous Americans whose rock art provide the only clue to the visions that may have given cultures long vanished a glimpse at humanity's dubious future.

At the book's core are hard, perhaps insoluble, puzzles that involve the very nature of sustainable living and the hard-wired human responses and desires that make harmonious co-existence with nature so hard for us to achieve. [...] The book features long passages about classical poetry and scholarly digressions regarding ancient rock art; these sections of the novel slow down the narrative momentum, but they add another layer of meaning at the same time. In retrospect, the book as a whole is a multi-faceted work that draws together threads from a variety of scientific and artistic realms; this is the sort of story you don't just read–you have to soak in it and soak it up, following Moffett far afield and back again to get the full range and depth of her message. 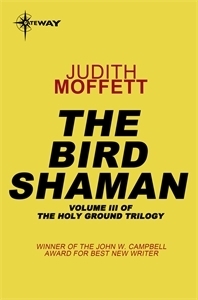 Order The Bird Shaman direct from the author:

Or buy from Amazon: