When an ambitious young botanist named Nancy Sandford discovers that she is positive for HIV, she scraps her plans for a world-class research career and reinvents herself as a mediocre professor in an academic backwater, hoping in this way to keep her secret concealed and to survive until a cure is found. In her struggle to endure the loneliness and terror of such a life, Sandy involves herself in activities ranging from the botanical to the bizarre; and both sorts come into play when an accident occurs at a power plant near her home, and, soon after, an alien ship lands on the moon. The meltdown shatters Sandy's carefully restricted personal world, yet its consequences--combined with alien intervention--bring about a startling conclusion to her situation and to the story.

"Tiny Tango," written in 1987, was an early attempt to grapple with the AIDS epidemic in fiction. It appears (as Chapter 3) in The Ragged World, Vol. I of the author's Holy Ground Trilogy, and was a finalist for both the Nebula and the Hugo.


From reviews of The Ragged World:

"One particularly empathizes with Nancy Sandford…: Nancy is HIV-positive and has isolated herself from all social contact, friendship and love--even after an AIDS vaccine is discovered. In one moving scene, she lies bleeding from a fall and hysterically refuses help, afraid to pass on the disease to her rescuer. 'Tiny Tango'…deeply affects the reader with the pain of a pariah's loneliness." --Los Angeles Times Book Review

"Background [for the novel] comes from 'plant breeder, magazine editor, and sometime biology teacher' Nancy Sandford [whose] personal background is moving and ironic. While a student at the University [of Pennsylvania], she slept with her major professor and contracted HIV, which she kept dormant for decades through a conscientiously applied program of meditation, organic diet, and the regular, professional care of a counselor and a group of other HIV-positives. One by one, they developed full-blown AIDS, and one of the most moving moments is when the counselor, who never revealed her own condition, succumbs. Of the day an AIDS vaccine is distributed, Sandford says: 'Imagine how people crippled from polio must have felt when they started giving out the Salk vaccine on those little cubes of sugar, and the cripples had to stand around on their braces and crutches and try to be glad.'" --David Bradley, The Pennsylvania Gazette


Comments about the novella:

"['Tiny Tango' is] a powerful and deeply moving tale that may be one of the most controversial and talked-about stories of the year." --Gardner Dozois, editor, The Year's Best Science Fiction, Seventh Annual Collection

"Judith Moffett's 'Tiny Tango' (1989) shows an accomplished writer who is not afraid to provoke and disturb her readers."--Pamela Sargent, editor, from her Introduction to Women of Wonder 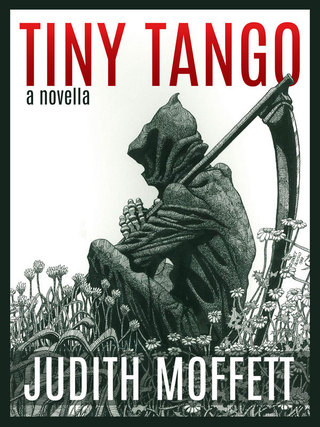