Poet and science-fiction writer Moffett (The Bear's Baby and Other Stories, 2017, etc.) recalls decades of friendship and correspondence with the Pulitzer Prize–winning poet James Merrill.

As a doctoral candidate at the University of Wisconsin-Madison in 1967, Moffett took Merrill's poetry class and found him to be exotic and unique. It led to a nearly three-decade friendship, here preserved in letters and extensive journaling. Moffett went to Sweden to translate poetry, returned to America, and spent years in frenzied activity—writing, teaching, and moving from place to place—all the while sending her poems to Merrill for review. Their friendship was warm, if somewhat anxious on her part, and full of Merrill's self-styled mystery ("the person who puzzles + fascinates us needn't be a puzzle at all, so much as a key...to the unsolved puzzle of ourselves," he wrote to Moffett in 1970. The closeted, gay Merrill didn't let Moffett get too close when it came to discussions of sexuality, but she addressed it through literary criticism. A who's who of the poetry world appeared at various conferences and readings, including Elizabeth Bishop, Allen Ginsberg, and Robert Bly, and Moffett provides color commentary. Her Merrill scholarship is exhaustive, as she spent years writing a book about his work while finding success with her own poetry. She and Merrill were rarely in the same place, but she lovingly describes a 1973 trip to Greece and moments at his New York City apartment. Both eventually struggled with serious health problems, but they remained close due to their obvious reliance on each other's intellect and their lifelong dedication to their crafts. Moffett's painstaking memoir is epic in length but remains consistently engrossing. Particularly noteworthy is her desire to get to the root of her own fascination with Merrill, and she reaches some surprising conclusions about herself. She tells her own life story of struggle and success with undying fervor, and Merrill's letters show him to be urbane, witty, a bit fussy, and generous when it mattered. The two were different in many ways, but Moffett's account of what they shared is authentic and impressive.

An absorbing, indispensable portrait of poets.

Judith Moffett has earned awards and recognition for 12 books across six different genres, but her recent memoir, Unlikely Friends (Time Tunnel Media), which earned a Kirkus Star, focuses on her singular friendship with the poet James Merrill. After taking his class at the University of Wisconsin-Madison, the two corresponded for the rest of Merrill's life as Moffett became a professor herself, undertook translating the work of Hjalmar Gullberg from Swedish to English, and began to write science-fiction novels. A poet and academic at heart, she spoke with us about Merrill's lasting influence on her work.

Why has it been important to you to work in such a wide range of genres?

It wasn't! I never set out to be anything but a poet, and in fact nearly all my work is related to poetry in one way or another. The different genres just sort of happened as I went along through my life, had different experiences, and got interested in different things.

What drew you to science fiction?

I read a lot of science fiction and fantasy growing up—the books available in the children's section of the public library in the 1950s.I don't know why fantastic fiction appealed to me so much; I'm not sure any of us who grew up loving it understands exactly why the attraction was so intense, but I think as a group, we were probably rather "different" from the other kids. I was a compulsive reader; I needed to believe that life could be other, and better, than the one I was living.

What first made James Merrill so fascinating to you?

It's hard to explain an initial attraction to a total stranger. Easier to say what it wasn't: not a romantic spark, not shared activities and interests (apart from poetry), not a sense that here was an admirable character. He was altogether different from anyone I had ever met before, a sort of alien being in midwestern Wisconsin….These things are mysterious! You recognize something in the perfect stranger that can take years—decades!— to figure out. Unlikely Friends spends a lot of time struggling to unravel the nature of that initial fascination.

Why did you decide now to write about the personal relationship you had with him?

Despite a strong desire to add what I could to the Merrill legacy, fill in the picture from my own unique perspective, I could see that I would have to say a lot about myself as well in order for the story to make sense. And I felt that readers would want to know about the Great Poet, not about me. But I had kept a journal throughout the years of our friendship, had saved all his letters, and I am, after all, an academic as well as a writer! To own such a wealth of primary material and not use it to contribute anything to literary history felt wrong.

Why was it important to share your many years of correspondence?

The letters of writers are so often collected and published because they are fascinating to readers. It's like eavesdropping on a private conversation between the poet and their various friends. Merrill was one of the last great correspondents; he had dozens and dozens, maybe hundreds, of friends with whom he exchanged letters regularly, and the letters are brilliant! And also, I wanted Jimmy to speak for himself in the memoir. The relationship had its ups and downs; I didn't want anyone to doubt that what I reported about him is grounded in fact, in his own actual words, often quoted at length.

In revisiting your friendship, what surprised you the most?

The biggest surprise was how consistently I had misinterpreted Merrill's attitude toward me. I thought all along that I had remained more or less on trial with him. Again and again, I saw tolerance and patience in the letters where I had recalled irritation. I certainly tried that patience, but he put up with me in a far kindlier way than I had remembered. That was a happy discovery.

Rhett Morgan is a writer and translator based in Paris.

Reviewed by Meredith Sue Willis in Books for Readers, November 22, 2019

Literary Politics and the Coming of Age of a Poet

This is the fascinating story of a relationship between the National Book Award winning poet James Merrill and the younger poet and science fiction writer, Judith Moffett. It is a lot of other things as well--a portrait of literary politics in the second half of the twentieth century; the post-Stonewall opening up of the gay closet followed closely by the AIDS epidemic; a complex psychological portrait of a young poet's near-obsession with an older one; an exploration of sexual ambiguity.

The gap in upbringing and class between the two JM's, Merrill and Moffett, is large enough to make friendship unlikely, and also sometimes uncomfortable. It is Merrill, not Moffett who refers to their relationship as an "unlikely friendship."

He is independently wealthy, raised with access to and delight in high culture. He never has to work for a living, and can devote himself to a poetry that is as brilliant, esoteric, and even elitist as he chooses. Moffett loves his early poetry and masters a formal style that is not popular with her contemporaries. She has rejected her upbringing as a low-church Baptist, and has to scrounge for a living--teaching jobs and literary grants. One of the interests of this book is how she figures out how to make a literary life for herself in a world where she begins as an outsider.

Two things draw Moffett and Merrill together. One is that they both have the highest devotion to and talent for poetry--particularly poetry with strict forms, often using rhyme, wit and wordplay as the scaffolding for building structures of emotion and thought. The other thing that draws them together is Moffett's devotion to Merrill as a person as well as a poet, and her persistence in making a bridge between herself and him.

She is fascinated by his poetry, but also by him-- by his sexuality, which excludes her, by the literary world where he moves in and out with such magnificent, confident aplomb. He is sometimes distant, and sometimes generous. His inner life remains a mystery to me, but a relationship does develop. Merrill critiques Moffett's poetry, and she responds to his poetry. She also teaches his work and eventually publishes an introduction to it aimed at those of us who Merrill really doesn't need or care much about.

In many ways, he seems difficult and willfully elitist. The book covers more than twenty years, and there is neurosis and maturing and devastating physical illness and love affairs of the the two principals, and an inside look at how university jobs are obtained and prizes are distributed.

Moffett, over the years, has considerable success in publishing and other recognition. Then the source of her poems dries up and doesn't return until after Merrill's death. Moffett, however, remakes herself into a science fiction writer-- and wins some of the biggest prizes available in that genre.

In the end, though, it is Moffett's frank and detailed analysis of her own psyche makes the book rise far above a coming of age memoir or a gossipy inside look at the literary world.

It is highly recommended, whether you were ever part of this special world of literature or not. 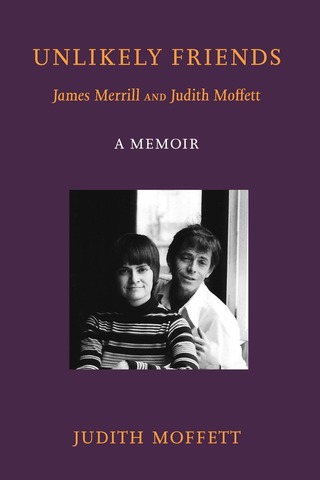