When the alien Hefn arrive on an Earth on the brink of ecological collapse, they determine to save the planet by forcing its human abusers to mend their biosphere-destroying ways, no matter how much suffering results. Obviously, their concern is for the planet, not the people who live there, most of whom have no personal contact with the aliens.


From reviews of THE RAGGED WORLD:

Kirkus Reviews— A small, moving, personal novel spliced together from previously published and new material (including the widely admired "Tiny Tango"), about the effect on a few intertwined lives when aliens assume control of our planet, having decided we're not up to the responsibility of caring for it.

Two small groups of rebellious Hefn, hobbitlike aliens, were marooned on Earth in 1623 by their masters, a mysterious race called the Gafr. Born to serve, the Hefn incorporate themselves into local folklore, becoming the helpful gnomes and hobs of Sweden and England. In 2006, the ship comes for survivors; finding none, it leaves; in 2010, it returns, and the Hefn take over (we receive a ten-year deadline to clean things up or be wiped out; the deadline is later lifted but all humans are sterilized until further notice). The last rebellious Hefn reveals the existence of the Gafr; readers then learn that the mysterious Gafr are the Hefn's wives.

Though no less of interest to men, this is quintessential women's (as opposed to feminist) sf—finely written, politically correct, and employing a minimum of hardware. Moffett keeps sf elements quietly in the background while exploring the convincing emotional lives of her characters—including a long-term AIDS victim; a politician with foreknowledge of a Chernobyl-like meltdown; the young boy whose best friend dies in same—all of whom belong to a well-realized and immediately recognizable type (they're college profs, or Rodale employees, or teach the deaf; even the Republicans are Green)… [A]n… impressive work.


The New York Times Book Review— The Ragged World: A Novel of the Hefn on Earth by Judith Moffett is an adult novel about little furry aliens, time travel, death and survival, not necessarily in that order. It is a hard book to describe without giving away too much or misrepresenting Ms. Moffett’s considerable achievement.

If I say that the aliens resemble hobbits and that some of the characters are threatened by AIDS while others fall victim to a nuclear meltdown, you are likely to get the wrong idea…. What is important to note is that everyone who plays a role in this complicated narrative is a stubbornly self-possessed individual—including the aliens and some unpredictable but never implausible teen-agers. You may not always know what is happening or why, but neither do the characters, and that is precisely the book’s strength. You will be engaged and moved by the quandaries of ordinary and not-so-ordinary people caught up in events that, for all their cosmic significance, are played out on what can only be called a domestic scale.
—Gerald Jonas


Library Journal—A race of gnomish aliens (known as "Hefn") intervenes in Earth's affairs and institutes a series of radical measures to save the planet, inspiring mixed feelings in the hearts of those whose lives they most closely touch. Crafted from a series of short stories previously published in magazines (including new material to link the stories), this novel by the author of Pennterra confronts sensitive issues with maturity and gentle humor. Recommended.


Publishers Weekly—In eight complicated, interlocking tales (four [sic] of which have been previously published; two are Nebula nominees), Moffett (Pennterra) has created a convincing near-future world in which earth has been “invaded” by the Hefn, a race of gnomish beings whose main demand is that humankind cease destroying the planet’s ecosystem. To this end, the Hefn impose stringent guidelines, backed by the threat of harsh punishment. But are the aliens a “deus ex machina, bringing humanity’s last, best hope for averting self-destruction,” or are they exhibiting a blatant disregard for human rights? Each of the stories involves a human who has affected by an encounter with the Hefn—and whose life is gradually revealed to be connected with all of the others. Moffett, winner of the 1988 John W. Campbell Award for best new SF writer, focuses on characters and emotions in presenting a provocative possible reality.


The Los Angeles Times Book Review—The “ragged world” of the title is our world, and a troubled world it is, wracked by crises ranging from SIDS to nuclear-plant meltdowns. The humans of Judith Moffett’s imagination are perhaps luckier than the rest of us, though, for on her Earth, gnomelike humanoids called Hefn arrive in 2010 and deliver the planet from itself. With the power to back up their directive, they order Earth to immediately cease its ecosystem-altering behavior or face species-wide infertility and the eventual demise of the human race. Moffett’s stories of humans forever changed by their encounters with the Hefn, recounted in these eight interlinked short pieces, are both intimate and heart-wrenching.

One particularly empathizes with Nancy Sandford and Jenny Shepherd: Nancy is HIV-positive and has isolated herself from all social contact, friendship, and love—even after an AIDS vaccine is discovered. In one moving scene, she lies bleeding from a fall and hysterically refuses help, afraid to pass on the disease to her rescuer. “Tiny Tango,” Nancy’s story, deeply affects the reader with the pain of a pariah’s loneliness.

At her best, Moffett is a fine storyteller with a style and grace reminiscent of the great Theodore Sturgeon. She gives so much life to her characters that we are sorry to see them go, even though we can be cheered by the news that a sequel is in the works.


Locus—Several of this month’s books feature conjurers—from exotic sf wizards of the far future to tribal shamans—but the greatest magic-wielder is one of the writers. In The Ragged World, Judith Moffett expands upon her earlier stories of the “Hefn,” where such wildly disparate elements as folk tales, aliens, ecology, and AIDS, melded to perfection: one miracle already achieved. Now, can she top it by working these self-contained tales into a “mosaic novel” which escapes the usual traps of the literary fix-up? Just watch her!

Die-hard novel readers who did not see “Remembrance of Things Future” or “Tiny Tango” in their magazine appearances may have to be coaxed into picking up a book centered around gnome-like aliens, a number of whom have lived quietly in Earth exile for several centuries, until the Mother Ship returns. Short, helpful aliens gone rustic in the wilds of Yorkshire and Scandinavia, where they’re known as Hobs or Tomte…spacefaring aliens who call themselves Hefn and, reluctantly (but forcefully) intervene in the mess that mankind has made of the late 20th/early 21st-century Earth…. Add in a disastrous nuclear meltdown in Pennsylvania, the ethical/ecological concerns of Quakers and Greens, and a deus ex machina that’s more than anyone bargained for. Those who have seen the stories already know how brilliantly Moffett turns her unlikely material into fiction without a trace of cuteness or dreary preaching, centered around unforgettable characters, both human and Hefn. Others will have to take my word for it; as a self-confessed slacker when it comes to keeping up with magazines, I’d previously read none of these tales myself.

Now, for those of you who are already well up on Asimov’s and F&SF, and are wondering how a gem like “Tiny Tango” could possibly become a functional part of a novel: It does, because Moffett wants it to. Previously unpublished stories/chapters “Glass and China Dogs”, “Elphi’, and “Twenty Twenty” tie things together with a thoroughness that ought to seem contrived, but doesn’t—thanks, once again, to Moffett’s mastery of character. Her people meet, marry, die, suffer, rejoice…and a chapter of loose-end knotting becomes powerful enough to provoke tears. In the end, it all connects, and it all matters. The Ragged World is a triumph.
—Faren Miller


Analog—Judith Moffett earned nominations for both the Nebula and Hugo awards with her 1989 story, “Tiny Tango.” So many related stories—“Remembrance of Things Future,” “Ti Whinny Moor Thoo Cums at Last,” “Final Tomte,” and “The Ragged Rock”—have also appeared recently in the magazines that it’s really no wonder to find them pulled together and published as a novel, The Ragged World, subtitled “A Novel of the Hefn on Earth.” The individual stories are each excellent, and they all take place in the same future. They also involve very different people with few apparent connections. Moffett forges and strengthen those connections in the material she has added to the published stories, and she does indeed knit the pieces into a single whole, albeit one rather more dependent that usual on coincidence.

The basic gimmick is simple enough: The hobgoblins of folklore are rebellious aliens set down on Earth centuries ago to repent the error of their ways.The return of the mother ship, however, was delayed until the early days of the twenty-first century. By then, a few people had met the hobs or Hefn and had their memories of the meetings suppressed. One of these people is a college student who glimpses his Hefn in a time-window; he also glimpses a future in which a Pennsylvania nuclear power plant suffers a meltdown; he becomes a politician with a private preparedness policy. Another is a walker on the English moors.Another important character is a HIV-positive woman who struggles to defend herself against AIDS by living a low-stress life—until the day of the meltdown. There are two intensely bonded children, one of whom will…

I shouldn’t say too much there, should I? So let’s get back to the Hefn and their secret masters, the Gafr…. The aliens are definitely nice guys (though they do go rather overboard in their insistence that testing an AIDS cure on animals is a no-no), and it is their presence that makes the story possible. Yet they are largely background. The story itself is one of human beings, of human agonies and loves, of human losses and triumphs.

Moffett handles her story and its characters with marvelous warmth and empathy. You, like me, will find her imagination a wondrous place to visit. 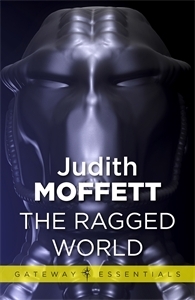 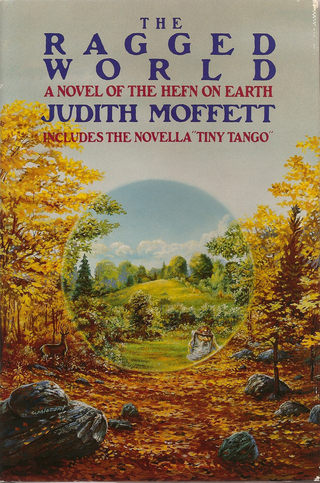 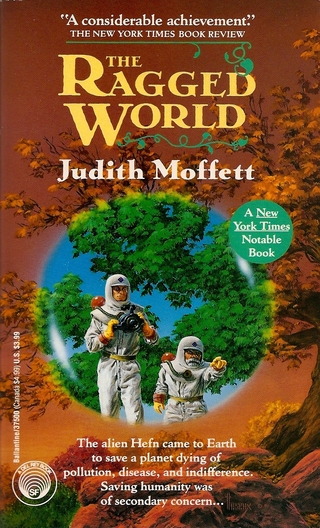