In this second book of the trilogy, Pam and Liam-two mathematically gifted but emotionally traumatized teens-are being trained in "time-window" technology by the Hefn Humphrey. On spring break from the Bureau of Temporal Physics, they travel by steamboat to Hurt Hollow, a homestead/museum in rural Kentucky. For many years people have visited the Hollow and been drawn to the labor-intensive life lived there by forces they can't account for. Arriving just in time to take over for the hospitalized caretaker, Pam and Liam are joined there by their teacher, the Hefn Humphrey, founder of the Bureau and mentor to Pam and Liam, who wants to know whether the Hollow can somehow persuade people to embrace a stewardship of the Earth. But what begins as a bucolic vacation, filled with goat-milking, gardening, beekeeping, and speculation about the mysterious appeal of the place, turns nightmarish as a Hefn-hating evangelist rouses the locals and leads an attack on Humphrey, intending to kill him. Despite the odds, the Apprentices must go to the rescue.

Library Journal— A woman's voyage into her past via a series of diary entries, letters to a distant friend, and a novel-in-manuscript (which includes end-of-chapter comments from the distant friend) provide a focus for Moffett's latest exploration of the near future. This sequel to The Ragged World: A Novel of the Hefn on Earth continues the tale of a benevolent invasion of Earth by the Hefn, a race of gnome-like aliens. Moffett's combination of harsh realism with visionary zeal addresses contemporary issues and personal struggles with compassion and insight. This novel belongs in most libraries.


Publishers Weekly— Early in the 21st century, the Hefn—an alien race who are the slaves (sic) of the unseen Gafr—have taken over Earth in order to save it. Prohibiting pollution, they have also forbidden humans to procreate until the population stabilizes. (Moffett set all this up in The Ragged World.) Here, a Hefn named Humphrey has formed the Bureau of Temporal Physics, where nine teenage math prodigies work on Hefn time-travel apparatus; two of them, Liam O'Hara and Pam Pruitt, are the focus of this double-layered story. Pam, at age 25, has written about her life at 14 and has sent a copy of the manuscript to Liam, whose comments appear at the end of each chapter. The chronicle tells of Pam and Liam's vacation from the BTP as teenagers to Hurt Hollow, a back-to-nature farm in Indiana (sic) whose residents live off the land without any modern conveniences. Human hostility toward the "benign dictators" comes to a head in a dramatic confrontation involving Humphrey, Liam and Pam and a fundamentalist preacher who believes the Hefn are the Antichrist. Intriguing for its then-and-now structure, this is also an engrossing character study of two teenagers.


The New York Times Book Review— Time, Like an Ever-Rolling Stream, by Judith Moffett, is candidly billed as a sequel to "The Ragged World: A Novel of the Hefn on Earth," Ms. Moffett's earlier tale of eccentric humans and even more eccentric aliens. Thanks to some adroitly handled introductory matter, the new book stands on its own as a narrative. More to the point, it breaks new ground in the successful integration of science fiction and the mainstream novel.

The theme, as before, is ecological. The Hefn, who bear a deceptive resemblance to such furry little mythical creatures as hobbits, have taken firm control of the earth in order to keep humans from irreparably damaging the environment. Only "sustainable" technology, such as the production of electricity from wind, water and solar power, is permitted, and a corps of bright young humans has been recruited to preach the gospel of interdependence with nature—not without some resistance from die-hards who resent being told what to do by eco-freaks, either home-grown or extraterrestrial. The story also involves time travel and an attempt to prove that the planet is girdled by "magnetic currents" that intersect at "nodes" where early mystics located their holy places.

What makes Ms Moffett's work so unusual is that instead of centering her narrative on these plot elements, she presents them as footnotes to a very different kind of story: the coming of age of a gifted but emotionally arrested young woman named Pam Pruitt. The bulk of the book is an autobiographical manuscript that Pam sends to her closest friend, Liam, who like her is a protégé of the Hefn. The manuscript deals with events that are crucial to the earth's future; but Pam's motives for writing it, and for sending it to Liam, are essentially personal. Although she feels sure that it contains "everything important about what was happening in my family during the time I was growing a woman's body," self-knowledge eludes her and she asks Liam to help her gain the insights that will ease her "anxiety and dread."

The result is a complex narrative that has as much to say about Pam's menstrual cramps and her tense relationship with her father as it does about what humans must learn to avoid following "the dinosaur into oblivion." If you think that there is no connection between personal and planetary salvation, it is Ms. Moffett's business to persuade you otherwise.
—Gerald Jonas


From the 1992 James Tiptree, Jr. Award Shortlist Notes—A good science fiction novel about incest or the threat or possibility thereof. Moffett also does a good job of showing the connection—for many conservative Christians—between religion, consumerism, disrespect for the planet and fear of different people."


Locus— …A different school is in the making in Time, Like an Ever-Rolling Stream, Judith Moffett's sequel to The Ragged World—the school (also a religion-in-the-making) of ecological consciousness and environmental responsibility, all too necessary in a ravaged 21st-century Earth. As Moffett imagines it, this earth has received a second chance at survival thanks to the intervention of the Hefn, gnome-like aliens who slap on a mind-manipulation rendering humankind sterile, then tackle the harder task of changing human heart and minds, eliminating the indigenous short-sightedness.

In The Ragged World, this ecological/spiritual concern pervaded a plot that had wry overtones of fairytale and sudden shocks of dystopian disaster, and the unlikely mixture worked. For the sequel, Moffett had the more difficult task of repeating the message with new means, and striving toward something besides an exmachina solution to mankind's problems….

A long letter and journal entries by heroine Pam Pruitt frame a novel-within-a-novel: an autobiographical tale of Pam's difficult adolescence, her friendship with young Liam (a character from The Ragged World), and their dealings with the Hefn, as members of a team of mathematical whiz-kids set to work on the aliens' "time window" project. The letter provides a refresher course in the events of Moffett's earlier book, while conveying some sense of the grown-up Pam and Liam. The subsequent novel by Pam, annotated by Liam and with the same title as Moffett's book, chronicles a coming-of-age in the 21st century. Despite the future setting, it has the feel of mainstream, sticking to the narrow focus of adolescence (as the older Pam admits) and taking place largely in an isolated rural site where time almost stands still.

Hurt Hollow is a sacred place in a down-home key, settled by a 20th-century homesteader/artist and his wife, and preserved as a living example of rural self-sufficiency by the caretaker who follows them. It's also home away from home for Pam, a bright, tomboyish girl with family problems—in particular a strange father given to "inappropriate" behavior.

When the caretaker is hospitalized, vacationing Pam and Liam are left in Hurt Hollow to cope on their own with problems both natural and man-made, until a Hefn shows up. Even the presence of Hefn Humphrey does not turn the narrative into outright science fiction, for the atmosphere remains pastoral yet tense, a cross between Huckleberry Finn and, perhaps, Catcher in the Rye.
—Faren Miller


Bookwatch—Judith Moffett's Fall title Time, Like an Ever-Rolling Stream… deserves ongoing mention as an exceptional sequel to The Ragged World. The book easily stands alone and is based on the strong characters of teens Pam and Liam, two phenomenal math whizzes who live in a world controlled by benevolent aliens. Fine insights on alien/human understanding permeate a compelling, dramatic and realistic story. 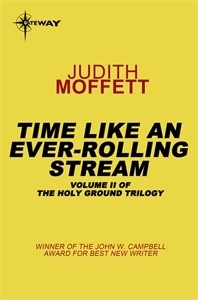 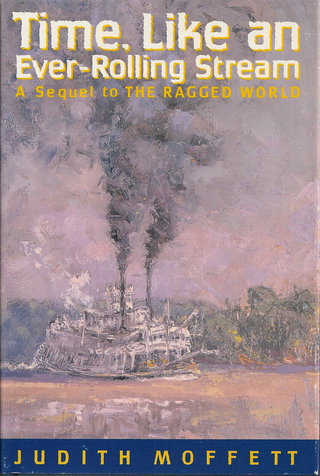 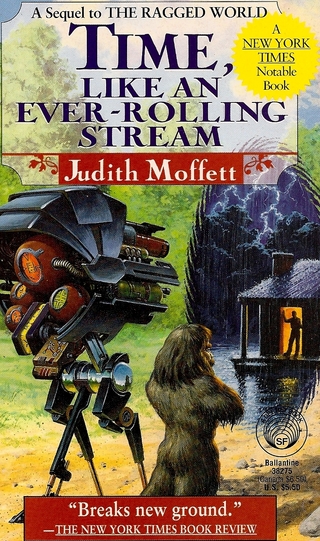